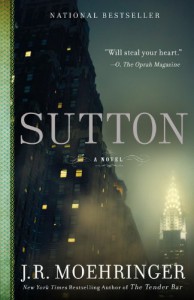 I pulled J. R. Moehringer’s Sutton off the shelf because the cover caught my eye, as did the simplicity of the title. I read the blurb on the back and knew I had to buy it, in spite of the fact that is was an Oprah book (vomit).

Sutton is Moehringer’s version of the life of Willie ‘the Actor’ Sutton, who was once upon a time the most famous bank robber in the world. According to Moehringer’s calculations, in a career that spanned several decades Sutton took down 37 different banks in and around New York City, using props and costumes – but never violence – to get inside, get what he wanted and get out again. Sutton crashed out of several different prisons, changed his identity and lived much of his life on the run. But Moehringer’s story isn’t really about that. Moehringer’s story is a love story.

In his account of Sutton’s life, Moehringer places enormous emphasis on Sutton’s first love, Bess Endner – a girl from a wealthy family whose relationship with poor Irish Town boy Willie Sutton got them both in enormous trouble, and kickstarted Sutton’s life of crime. She moved on, got married, had children – while he went to prison for almost ten years.

Moehringer’s novel is a curious combination of whimsical young love and the gritty, horrible reality of prison and crime in early 20th-century New York. And for the first 300 pages, it works. Sutton’s tender obsession with Bess makes the reality of his time in jail and on the run that much more poignant, that much more tragic. But Bess as a character is more complicated – or perhaps not fully realized by the author. Bess’ love for Sutton feels more than genuine when she has an active role in the story, but once they’re separated she seems to have little interest in reconnecting with Sutton or even atoning for her role in his incarceration. And Sutton, though his every thought in some way or another comes back to Bess, seems content to let her carry on living without him when pursuit of her is inconvenient. Perhaps Sutton loves the idea of Bess more than he really loves her, or maybe he only loved her as she was at age sixteen, or maybe he was simply afraid of what she might do if he really pursued her.

These are all questions that Moehringer almost poses, and never quite answers. It’s not unusual for an author to leave such speculative questions answered, so that wasn’t my objection to Moehringer’s ending. My objection has to do with a much more jarring lack of closure.

The first 90% of the book is fairly consistent in its treatment of truth vs. rumor and truth vs. mythology. But in the last twenty pages or so Moehringer throws the whole scheme out the window by (minor spoiler alert) telling the reader that Sutton may have been full of crap all along. May have been. He never really gives a definitive yes or no.

This sort of ending is tremendously unfair to a reader. It left me feeling as if I’d been led on, because up until the very end, there was no real reason to suspect Sutton of being an unreliable narrator (the story is written in third person, but Willie is telling it). I felt as though I’d been tricked into caring about the outcome of a story that may not have been true from the beginning.

Don’t get me wrong – an unreliable narrator isn’t wrong. But writing the first nine tenths of your book as if he is perfectly reliable and then suddenly yanking the rug out from under him cheapens your story and leaves the reader feeling cheated. At least, that’s how I felt.

Here’s my other major point of critique: WHERE IN THE HELL ARE THE QUOTATION MARKS? I just did a post about dialogue, in which I brought up this problem. Who in the world decided that we don’t need quotation marks for dialogue now? When I started reading this and realized there were no quotation marks, I honestly considered chucking it out the window. Why risk confusing the reader? Really, I ask you, what is the logic behind this? You’d think that Moehringer, a journalist, would understand the importance of making quotations clear and accurate. Apparently not.

Those things being said, I didn’t regret reading or buying this book. Moehringer’s settings and characters are delightfully vivid. He paints a remarkably colorful portrait of New York from 1901 to 1968, and populates it with some of the most amusing (but simultaneously believable) characters I’ve seen in a work of fiction. Perhaps this has something to do with Moehringer originally being a journalist.

But here’s what ultimately makes the book a delight to read (at least up until the end), and kept me going despite the infuriating lack of quotation marks: Moehringer’s prose is – there’s really no other word for it –electric. He has a remarkable ability to convey grief, fear, happiness, irony – so many enormous things, with only a few words that just happen to fit together splendidly. I have to say, I did not expect such rich and splashy prose from a journalist-cum-novelist. Moehringer clearly has some creative flair, but it’s nicely balanced by a perhaps journalistic notion that brevity is the soul of wit (and just speaking of wit, parts of this book are hilarious).

The passage below was one of my favorites. If it sounds like something you’d like to read more of, go find a copy of Sutton. It’s worth a few hours of your week.

“He likes that first sight of those jewels. People are already mad for diamonds, but people don’t know the half. The haunting beauty of stolen diamonds in a black silk purse at two in the morning – it’s like being the first person to ever see the stars.”

Three stars. Buy it on Amazon here. Find it on Goodreads here.