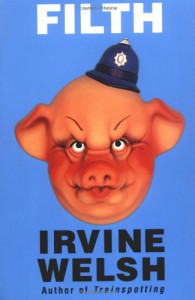 Filth is a book best read in small doses.

Anybody who’s read Irvine Welsh’s literary flagship, Trainspotting, will have some idea what to expect when picking this up. Personally, I think it’s actually a better book.

I mentioned in an old post that I never finished Trainspotting. I’d like to some day, but back in December when I was trying to read it there were just too many characters to keep track off and I was struggling to find a reason to continue. Halfway through, I felt like I’d pretty much gotten the point and while it was fascinating stuff, there was no overarching plot to keep me intrigued.

Not so with Filth.

Filth is narrated by two different characters – Detective Inspector Bruce Robertson, a more-than-slightly-crooked Scottish cop with a shady past and crippling cocaine and pornography addictions, and D. I. Bruce Robertson’s friendly tapeworm. If you want a study in weird POVs, look no further. It’s bizarrely and brilliantly done – the tapeworm will suddenly interrupt whatever scene Robertson’s narrating and the words are simply written right over top of one another – which is confusing at first, but once you catch on, it’s simultaneously revolting, twisted and hilarious.

And the tapeworm is necessary, because he’s honest about all the horrible things Robertson’s clearly been repressing since his deeply  demented childhood. Robertson’s a highly unreliable narrator.

The story itself follows Robertson’s half-assed investigation of the violent murder of a black man in an Edinburgh alleyway – and Robertson spends more time jockeying for a promotion, manipulating a handful of different women, scratching a rash and sneakily derailing the lives of everyone around him than doing any actual investigating. That’s not where the story is.

Robertson is the story, and he’s a man you can simultaneously despise for his wickedness and admire for his evil (and unapologetic) genius. This isn’t a book you read for fun. This is a book you read to understand how a man can be the villain in his very own story.

Be warned – this book is saturated with sex, drugs, racism and R-rated dialogue, but it’s actually not done for the shock value. It doesn’t glorify these things. It shows how they all contribute to the disintegration of a man’s lonely, desperate and despicable life.

There are obvious downsides, of course. Not everyone will be able to read this without feeling sick (on more levels than one). But that’s kind of the point. Bruce Robertson is a man you simply can’t stomach, and Filth boldly endeavors to discover just when and where everything went wrong.

It’s upsetting, unsettling, disturbing, and in places disgusting – but it’s also a hell of a piece of work.

I have only a few small points of critique: Sometimes it can be difficult to find the actual story, but in a book like this it’s almost understandable. In places the difference between dialogue and narration is difficult to find. In the last few chapters, the tapeworm delivers an epic info-dump which, despite being a little too much at once, will have you flying through the last twenty pages.

Irvine Welsh is certainly crazy, but he might just also be brilliant.

PS. They were filming parts of the movie while I was living in Edinburgh. It’s due out in 2013 and James McAvoy is playing Robertson, which seems like an odd choice to me, but I’m just an avid reader with an extensive theatre background, so what do I know? Needless to say I’m curious to see this one.